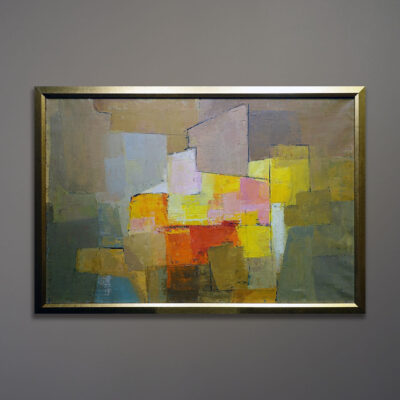 Offered here is an original abstract expressionist oil painting by Piry Rame (Czech, 1934-2000). It measures 38 × 26½ inches as framed in distressed gold leaf over wood. The frame is new. Unsigned and undated.

Offered here is an original abstract expressionist oil painting by Piry Rame (Czech, 1934-2000). It measures 38 × 26½ inches as framed in distressed gold leaf over wood. The frame is new. Unsigned and undated.

Piry Rame studied at Hunter College, Art Students League, and Pratt Institute. In the 1950s she gained critical acclaim as one of the few women AbEx artists. She was one of the original members of A.I.A., a gallery/studio/school collective funded by Art in America magazine. It later became A.I.A. (Artists Involvement in Art) based in Great Neck, Long Island. She studied under Leo Manso, Larry Rivers and Jerry Okimoto.

The roster of A.I.A. teachers included the abstract painter Nicolas Carone, known for his command of the optical and physical powers of pigments. He taught what is frequently called “the Hans Hofmann method,” which usually meant abstract surfaces developed intuitively with a confident color language. (The New York Times, 1984)

In the 1970s she was one of the founding members of the Pleiades Gallery when it was on Wooster Street in SoHo, New York City. She has work in the Smithsonian American Art Museum and its Renwick Gallery.

She was oddly averse to selling her work, so the family inherited the bulk of her creative output. They only recently agreed to start selling some works in private sales. This work was purchased directly from her grandson.

Due to the size and/or weight of this piece we recommend contacting us for a shipping estimate. We use FedEx and can generally ship for under $100.

Open 7 days 12 to 6. Longer hours on the weekend. Dismiss