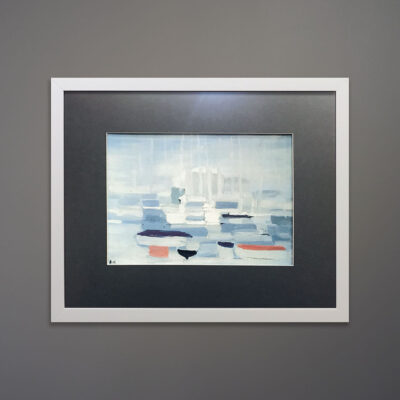 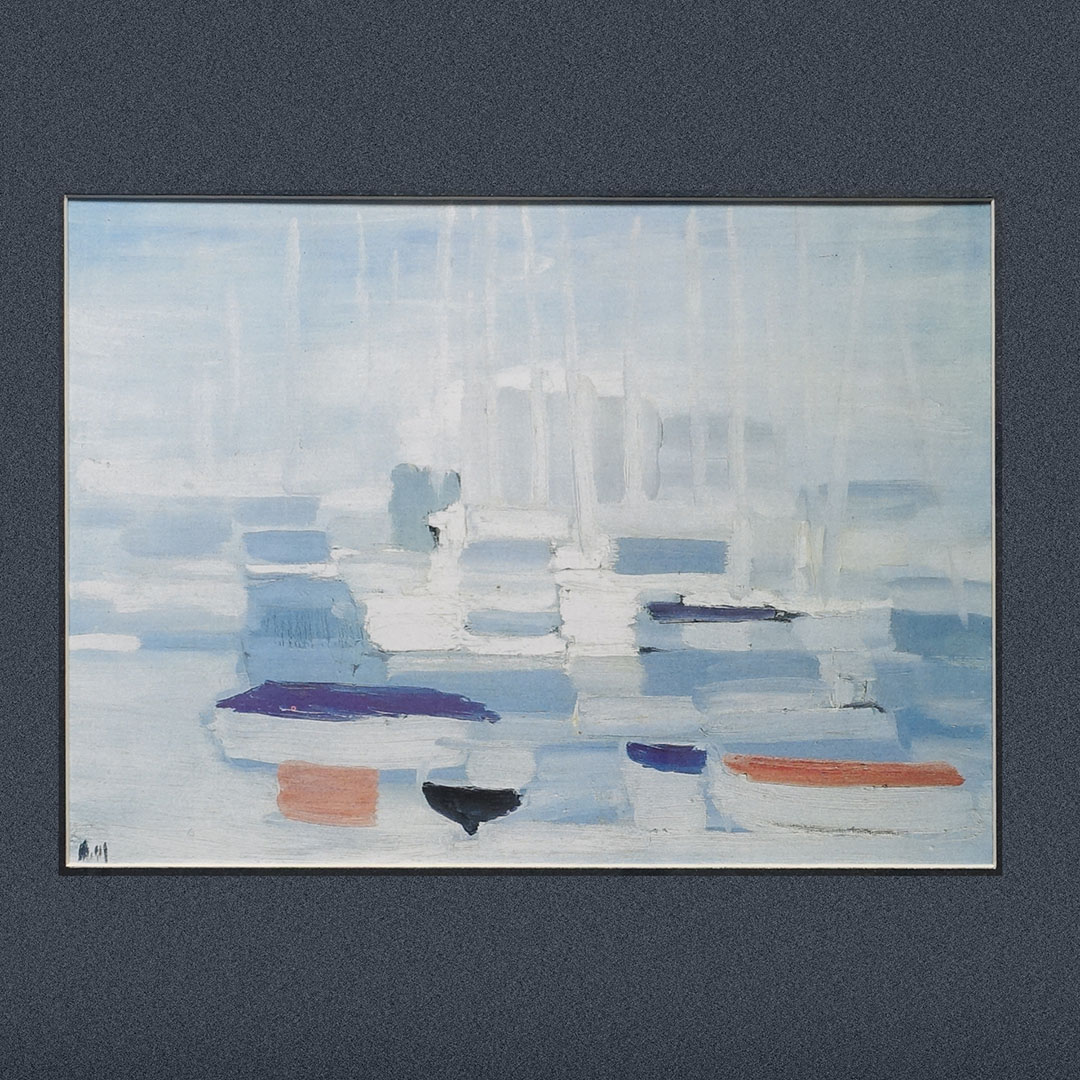 Love this nearly abstract impressionist 1955 painting titled “Barques dans le port” (Boats in the Harbour) by Nicholas De Stael. This small reproduction offset lithograph was printed in 1986 to accompany an exhibit in Paris. The framed size is 16 × 13 inches in white wood with a dark gray mat. See below for more.

This painting sold at a Christie’s auction in 2019 to a private collector for GBP 2,411,250. From the auction catalog: “Nicolas de Staël is widely regarded as one of the most important painters of the 1950s, his thickly-impastoed visions of the world around him played a pivotal role in the European post-War artistic landscape. Within a tragically short career spanning around 15 years, de Staël developed a unique idiom caught between abstract and figurative registers. Remaining conceptually independent from contemporary developments such as Abstract Expressionism and Tachisme, his works are defined by their juxtaposed slabs of colour, which seek to animate their subject through tensions in tone, form and texture.

“Painted in 1955, Barques dans le port (Boats in the Harbour) is a coolly sumptuous vision charged with the raw lyricism of Nicolas de Staël’s unique painterly practice. The work has been shown in an array of important exhibitions, including the artist’s major 1981 retrospective at the Grand Palais, Paris and the Tate Gallery, London, and bears the exceptional provenance of the collection of Jacques Dubourg: de Staël’s friend, dealer and greatest champion, who mounted the artist’s celebrated first solo show in 1950 and launched his international career.

Displaying his unmistakable technique, Barques dans le port’s swathes of thick oil paint are spread in glinting planes across the canvas with a palette knife. An intricate dance of form and hue brings forth a view of boats gathered in the port of Antibes. Subtle tones of misty grey, white and pale blue depict both sky and sea as well as a vertical shimmer of masts, behind which can be glimpsed the outline of Fort Carré, Antibes’ 16th century star-fort. Carefully deployed zones of red, black and midnight blue enliven the vessels’ hulls and sterns. The symphonic arrangement of shape and colour displays both de Staël’s musical eye for composition and his unique sensitivity to place. Having returned to figurative painting just three years previously after a long period of abstract work, de Staël was now able to distill masterful, luminous meditations on colour and form from his surroundings. He had a studio on the ramparts of Antibes from September 1954 until his tragic death there in March 1955: Barques dans le port is among the last major works that he completed.”