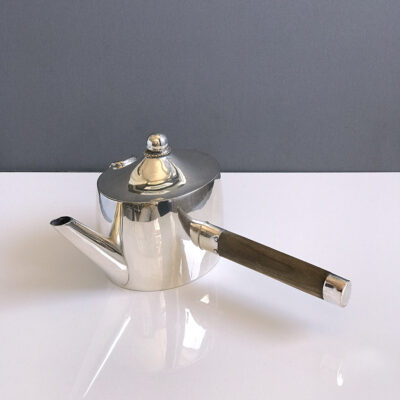 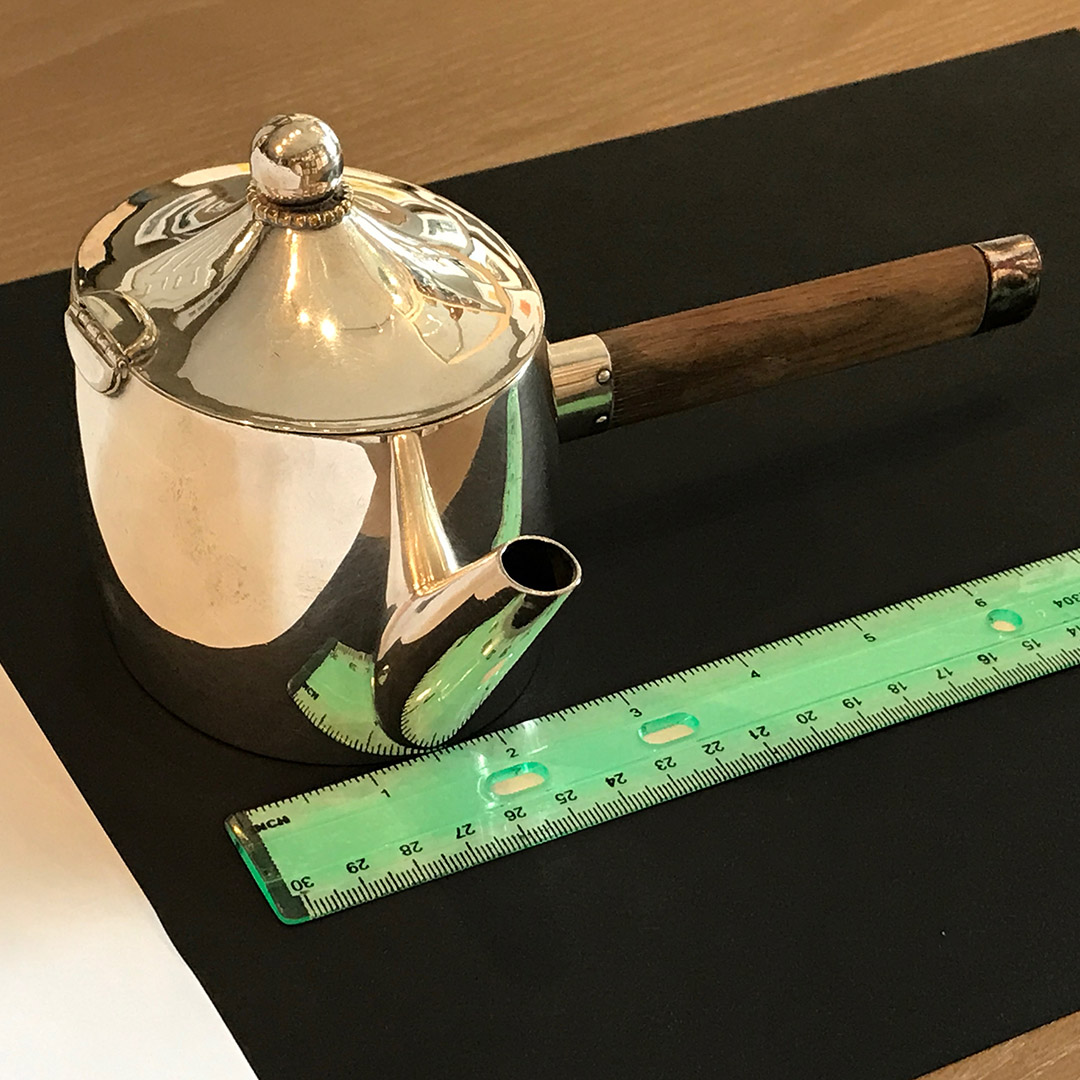 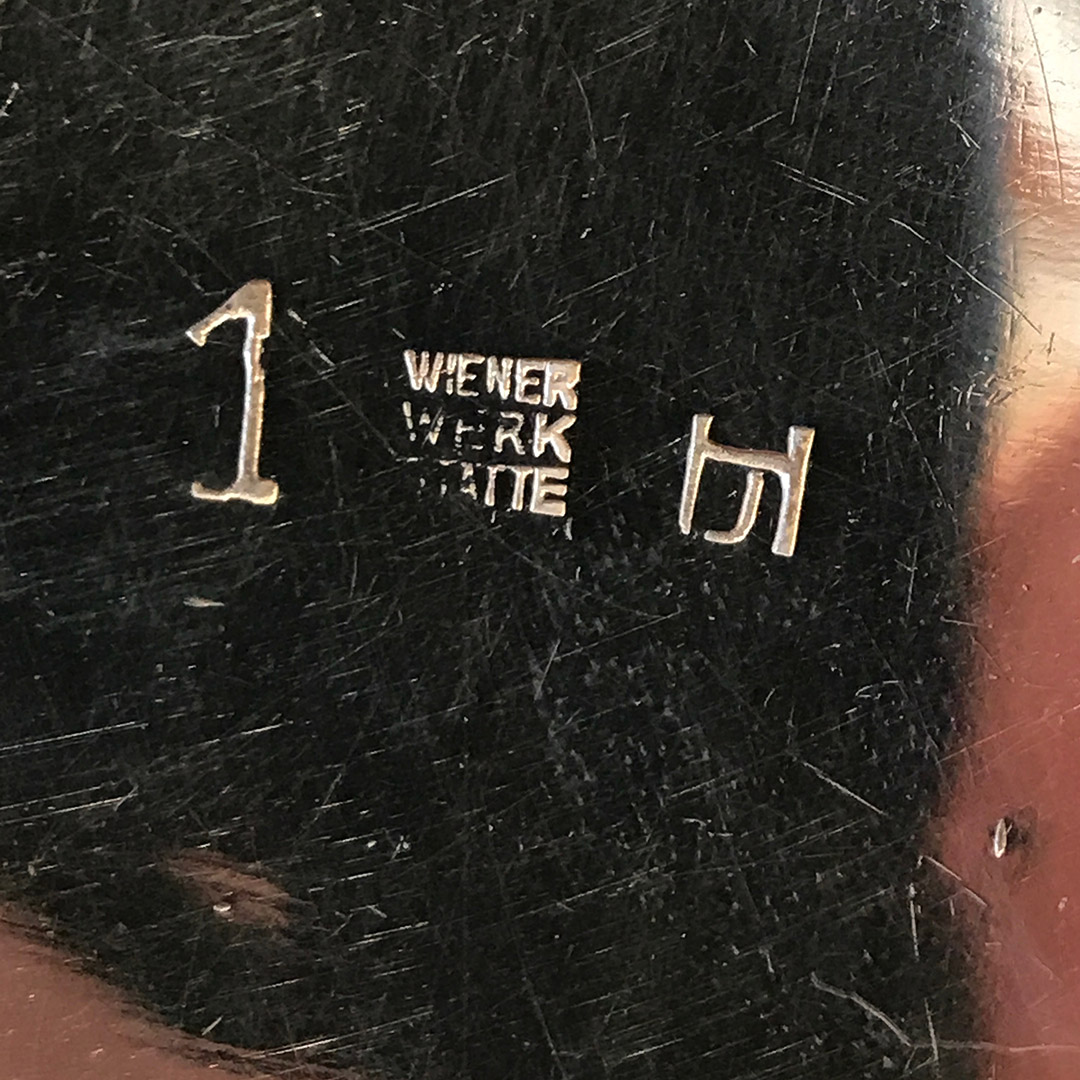 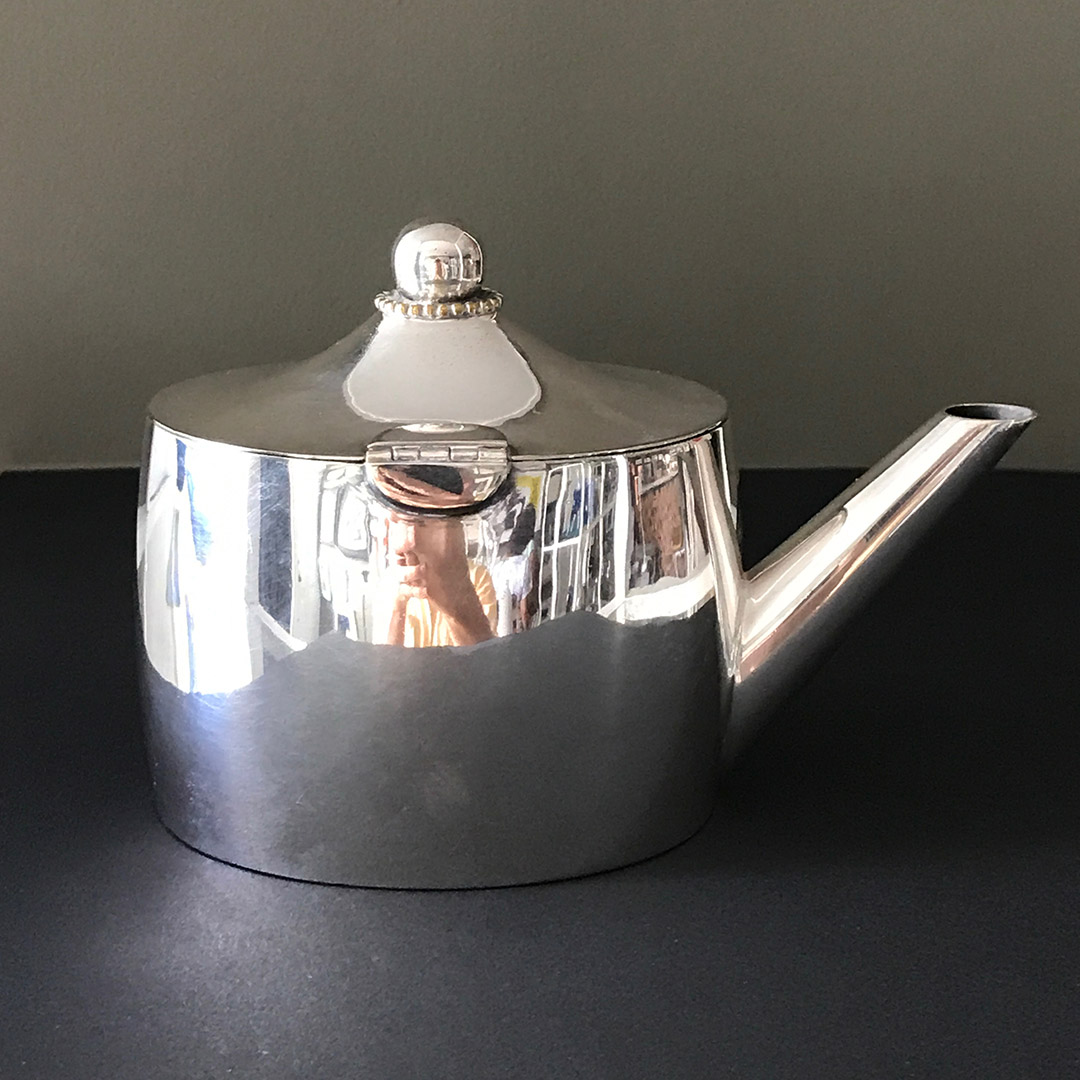 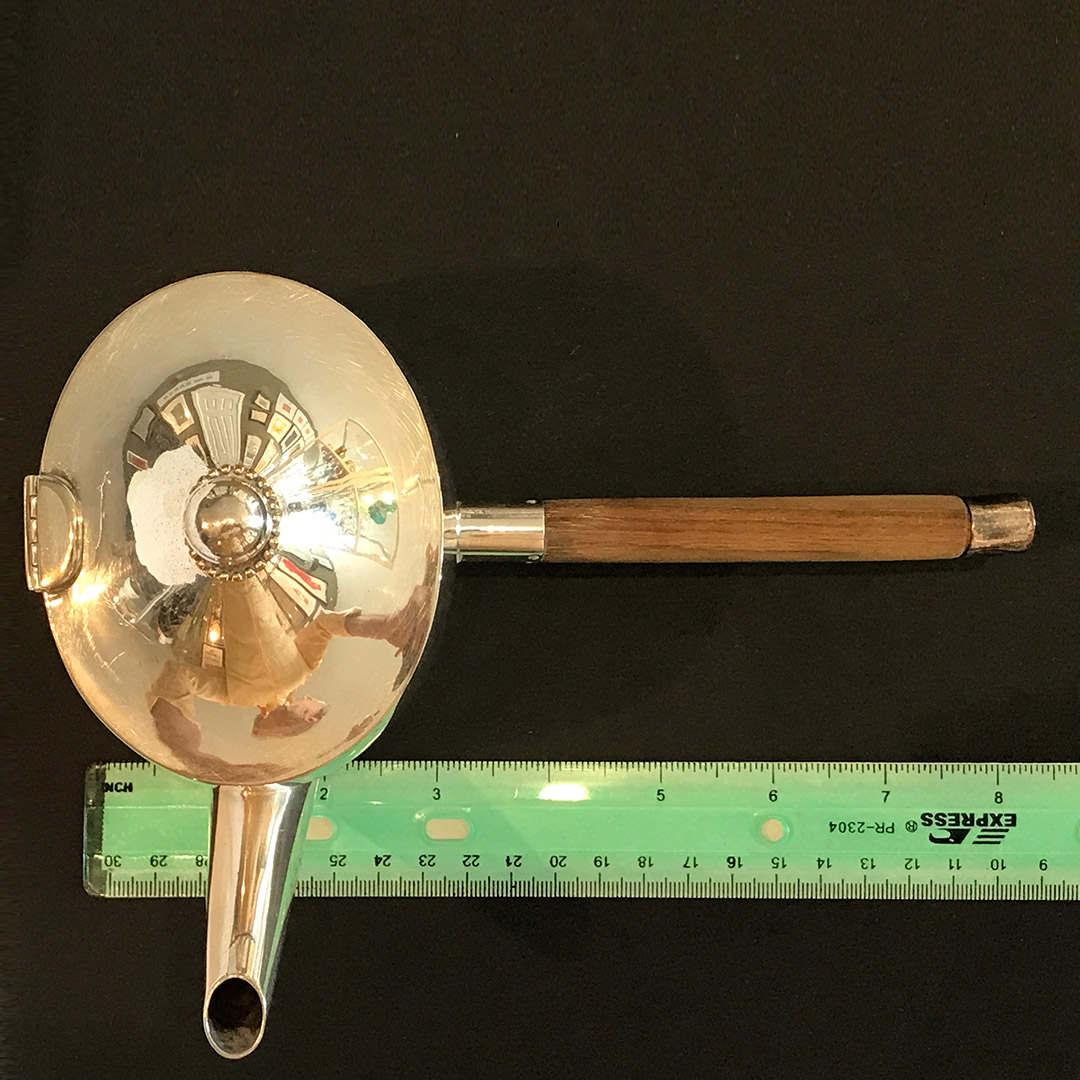 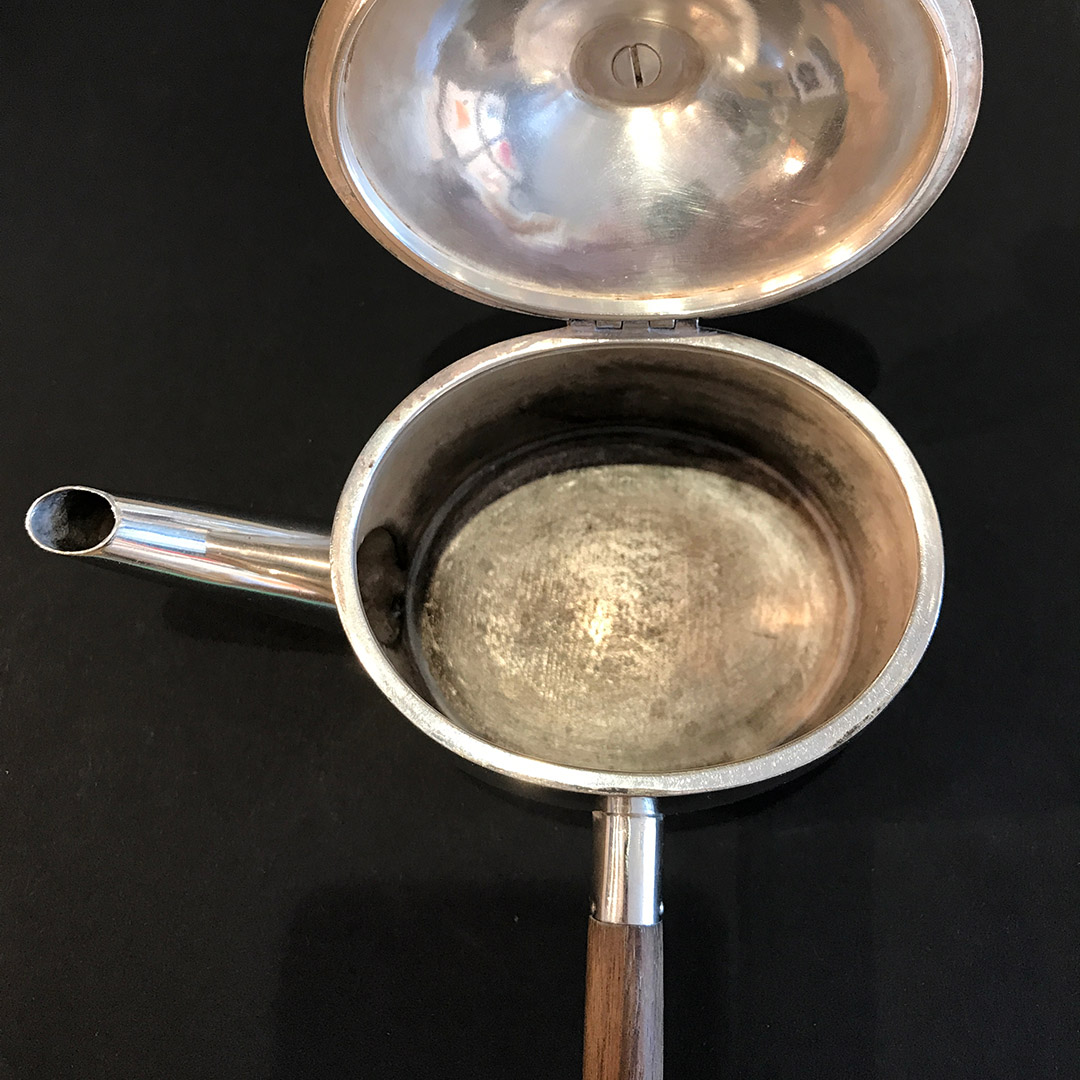 This teapot was designed by Josef Hoffmann in 1910/1911 and was manufactured by the Wiener Werkstätte in Vienna, Austria. It is stamped with the designer’s monogram JH as well as the Wiener Werstätte three-line logo, and a large numeral one.

Josef Hoffmann’s original design drawings for this service survive in the Wiener Werkstätte archive in the Österreichisches Museum für angewandte Kunst (Austrian Museum of Applied Arts) design numbers M. 1881-89 (Fig. 28, OMAK inv. no. 12051/8, a page of designs including the coffeepot, milk jug and sugar basin). The service was first executed in 1911 and produced until 1919-20.

After extensive searching, we cannot find many examples for sale in the public markets so we consider it extremely rare. For example, the British Museum has one but New York’s temple of Austrian art, the Neue Galerie, does not.

This teapot was designed by Josef Hoffmann in 1910/1911 and was manufactured by the Wiener Werkstätte in Vienna, Austria. It is stamped with the designer’s monogram JH as well as the Wiener Werstätte three-line logo, and a large numeral one.

It has an ovoid finial with a fine beaded edge, a wooden handle, and a hinged lid. The condition is excellent, showing the typical age-related wear. It is made from electroplated silver on copper. Slight wear to the handle’s silver tip where the copper shows through the silver plate.

Provenance: Janet Cox-Rearick, thence by descent. Janet is my maternal aunt. She was a well respected art historian, academic, and author who traveled extensively doing research and collecting.

Hoffmann trained under the architect Otto Wagner and worked alongside Olbrich in Wagner’s studio. In 1899 he was appointed Professor at the Kunstgewerbeschule in Vienna, having joined the Vienna Secession in 1897. Both Mackintosh and Ashbee had a formative effect on Hoffmann, Mackintosh as the dominant artistic influence and Ashbee’s Guild of Handicraft as a model on which to base a Viennese equivalent. But Hoffmann’s Wiener Werkstätte, founded in 1903 with Koloman Moser, had, unlike Ashbee’s Guild, strong financial backing, from the banker Fritz Warndorfer. Hoffmann designed furniture, metalwork, glass and ceramics for the Wiener Werkstätte, but remained a designer only and did not execute his designs himself.  (Information by Elizabeth Schmuttermeier for the British Museum).